Our long national nightmare is over: Josh Jung will become a Major Leaguer tonight. He (hopefully) concluded in minor league career with a double to center Wednesday afternoon. In 23 AAA games, Jung batted .273/.321/.525 with six homers and seven doubles. I dove into the Statcast data for good and bad signs. Note that Jung has only 106 plate appearances, so sample-size issues apply.

Jung’s average exit velocity of 89.5 MPH ranks near the 60th percentile for MLB hitters, and his hard-hit rate (95+ MPH) of 44.9% is around the 75% percentile. Also, this isn’t a Willie Calhoun situation of too many grounders resulting in a depressed and depressing slash line. His rate of grounders is below average.  (Popups, too.) 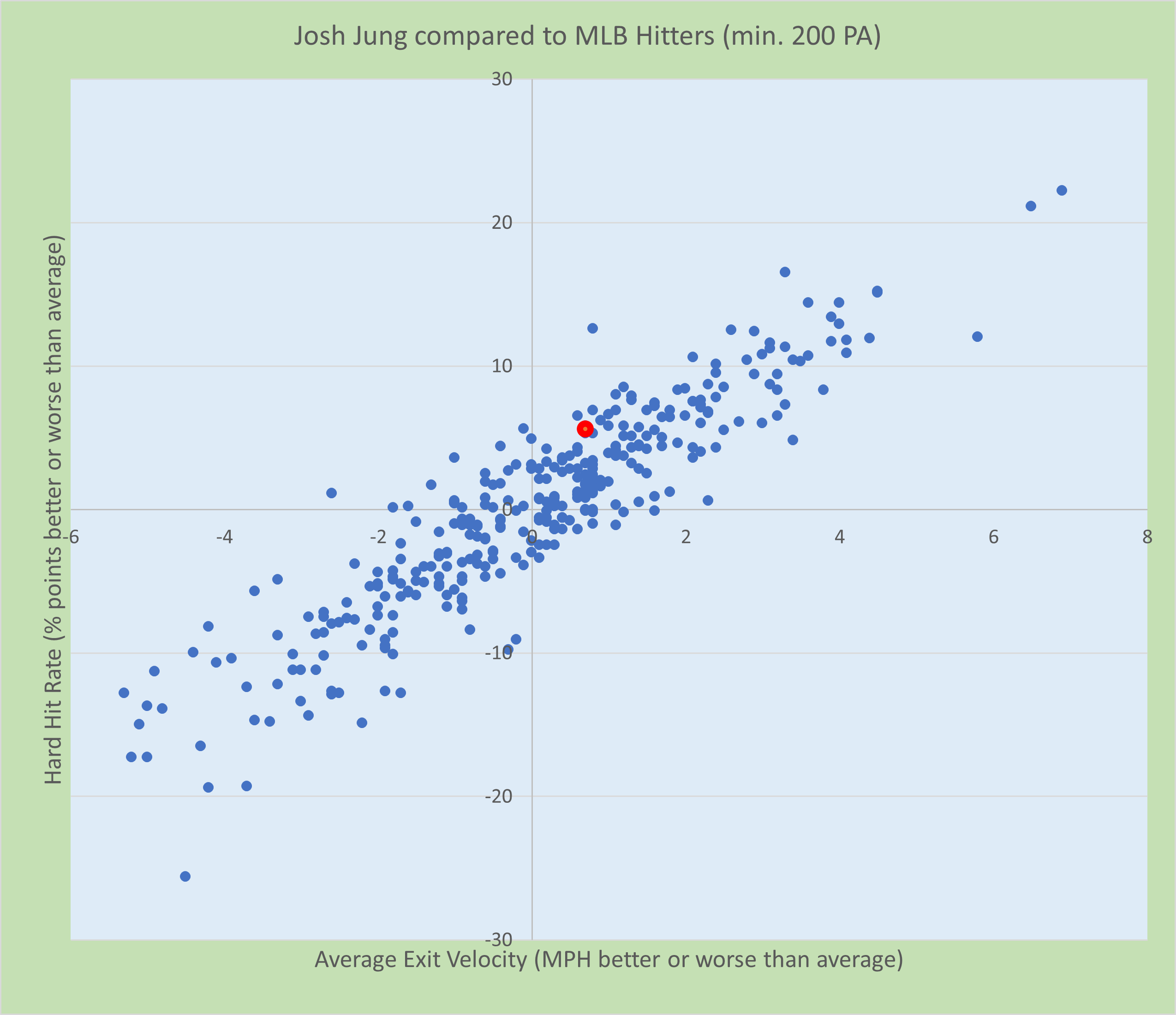 As you’ve surely heard by now, the opposite-field line-driving Jung of Texas Tech is no more. By my count, about one of every seven balls off Jung’s bat has been either a surefire homer or had a decent chance of becoming one. That’s double the rate of his teammates and opponents in AAA, and he’s hitting 1.000 with a 60% homer rate on those balls.

Good: He doesn’t have trouble with breaking stuff (sort of).

His average exit velocity and strikeout rates on fastballs versus non-fastballs are nearly identical, and his swinging strike rate is lower on bendy stuff and changeups. That said, nearly all of the non-fastball success is against sliders (.455/.455/.864 in 28 plate appearances), while he’s still looking for his first hit against a curve in eight at-bats and is hitting .176 against changes.

Only 43% of the pitches thrown to him have been fastballs, so he’s not going to be caught off guard by pitchers with deep arsenals.

Not So Good: Swings and Takes.

Usually, there’s an inverse relationship between a player’s swing rate and how often pitches taken are called balls. Cautious hitters will accept more borderline calls in search of the pitch they want, while swing-happy types will hack away, leaving only the most obviously errant pitches alone. Jung is an anomaly. In AAA, he swung at 52% of opposing pitches compared to the team rate of 47%, but the percentage of taken pitches called balls was only 65% compared to the team rate of 70%. 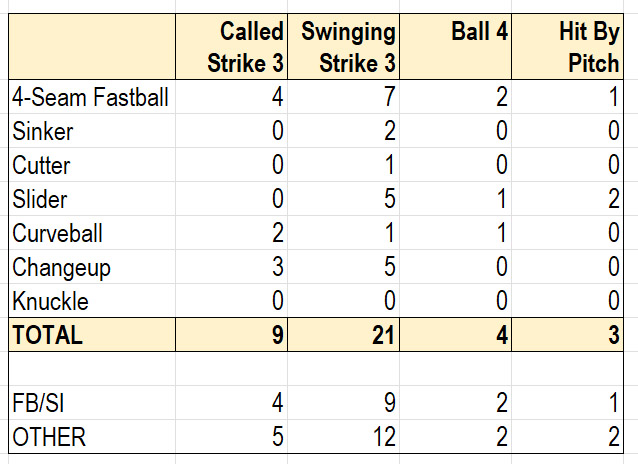 Similarly, Jung has a swinging strike rate of 15% of all pitches and 29% of swings, both about 3% higher than the team average. His swinging strike rate of 20% on four-seam fastballs is double the team rate. This is the background of his 4% walk rate and 28% strikeout rate in AAA, both on the wrong side of average. Based on this data, his noisy hit tools have compensated for some occasionally iffy pitch selection.

Jung drew two walks in his first AAA game. Since then, just two more in 101 trips to the plate. His overall walk rate as a pro is a 8.2%, slightly below average.

I don’t do comps. Not if I can help it. But I did run a list of players who most closely matched Jung’s average exit velocity, hard-hit rate, “sweet-spot” rate (launch angle between 8 and 32 degrees), and average launch angle. I’m not claiming this list has has predictive power, but i thought it was interesting:

The middle OBP stat is partly dependent on walks, which in Jung’s case are lacking, but on the whole, this is… pretty good? Not outstanding, not team-carrying, but good. Of course, hitting like this will require Jung to maintain his current batted-ball stats against much tougher opposition than he’s seen in AAA. No small task.

Texas has a total of 2.7 wins above replacement from its third basemen since Adrian Beltre’s retirement, and very little of that has come from hitting. I’m confident Jung will change that equation, but I’m not expecting Jung to set the world on fire in September, and not necessarily in future years either. I’m just hoping for a solid everyday player. That would be delightful.

The fans have spoken.

deGrom can probably buy it now if he wants.